Dirndl, Brezeln, Bier – All You Need for Oktoberfest 2018

It’s time to say auf wiedersehen to summer and willkommen to winter, and what better way than with an Oktoberfest in the Tetons?

Celebrate going from fun-in-the-sun to the upcoming ski and snowboard season with a traditional Bavarian Oktoberfest. Did you know skiing traces many of its origins to the German Bavarian Alps, where bier has been brewed – and consumed – for centuries in cozy beer halls, often with an enthusiastic “Prost!“? With such a tie to ski culture, its only natural so many resorts put on their lederhosen and dirndl and dust off the steins as autumn arrives.

The original and most-popular Oktoberfest is a 16-18 day beer festival held annually in Munich, Germany, at the base of the Alps. It is one of the key events in German Culture and is the world’s largest fair, with more than 6 million people attending every year and over 8 million liter of beer consumed as visitors enjoy amusement rides, traditional foods, parades, and games. It’s basically like a giant county fair from here in the U.S.! The event generally runs from late September to the first weekend in October, but varies depending on location.  But that’s modern Oktoberfest. So how did it come to be? 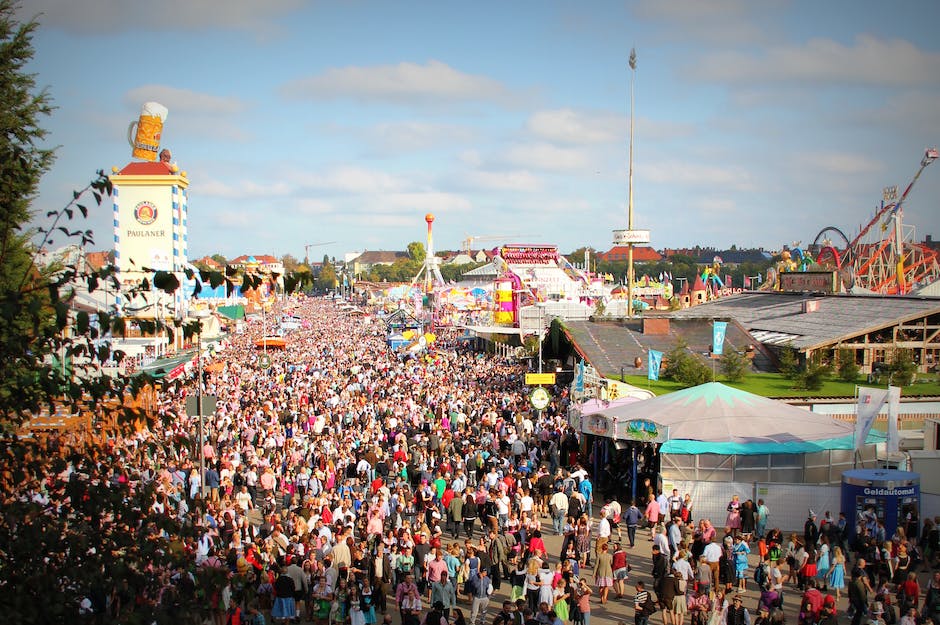 First Oktoberfest? Here’s a quick history lesson to get you up to speed!

It all began with a royal wedding on a sunny October day in 1810 in Bavaria, Germany. Crown Prince Ludwig (a man known for his love of art, festivities, and fun) welcomed the people of Munich to commemorate his marriage to Princess Therese Charlotte Luise of Saxony-Hildburghausen. The centerpiece of the day was celebratory horse races and food booths while 40,000 people of all ages continued to celebrate by the city gates for five days. The anniversary continued to be celebrated in following years and became an annual event in all of Germany. And thus, the tradition of Oktoberfest was born,  this year being the 208th annual!

Can’t make it to Germany in time?

More than a century after the first event, Oktoberfest Festivals are popping up all over the United States and has become a tradition for those with German heritage as well as many non-German people every fall, with festivities growing more inventive every year. Though there are some differences between traditional Oktoberfest and the American, like the greater emphasis on competitions, games, and food. And while steins of Oktoberfestbier remains a staple, micro brews and tastings have gained popularity. It’s the same fun, but each U.S host puts their own local twist, making Oktoberfest just that much more special!

Here in Wyoming, we decided that Targhee needed it’s own taste of German fall festivities! If you can’t get to Europe that’s no reason to miss out. It’s our third year and you can experience our mini Oktoberfest on September 15 at noon. Staying true to the Targhee personality, our Oktoberfest is a friendly and intimate festival that offers traditional live music, good food, and lots of fun!

Here’s what you can expect:

Come join the celebration and don’t forget to wear your best Oktoberfest getup! A best dressed competition is going to be happening for dogs, men, women, and children so it’s your chance! Check out this example of traditional Oktoberfest outfits, right here at Targhee:

This year’s Oktoberfest benefits the Teton Valley Community Animal Shelter and is a part of our Closing Weekend festivities! Dress your best friend and take part in the doggie parade. We’re kicking it off with our annual Brewer’s Dinner on September 14 at 6:30 pm and the fun continues throughout weekend! We’re rolling back prices and saying thank you for a great summer. Save 50% off slopeside rooms, bike park tickets, and scenic chair rides September 14 – 16, 2018.

A Final Farewell To Cat Skiing

A look back at the Winter so far…

Rapid Fire With Jaelin Kauf: The Olympics in Review

A Final Farewell To Cat Skiing

A look back at the Winter so far…

Rapid Fire With Jaelin Kauf: The Olympics in Review

Behind the report: What goes into snow reporting at GTR